There are 58 U.S. national parks and I’ve yet to see 19 of them.  Of those 19 jewels missing from my crown I have a reasonable expectation to see up to a half-dozen, as most of those 19 are too remote, some accessible only by aircraft (the Virgin Islands, American Samoa and a few in Alaska) or too flat and/or tame for my taste.  I prefer dramatic views and big mammals, preferably the dangerous kind, even if their presence is unseen.

Folks sometimes ask me,”Which is your favorite national park?”  Well, let’s see.  On September 18th, Sunday, I arrived at Two Medicine, the southernmost campground in Glacier National Park in Montana.  As I had seen during my approach from the east, it was overcast, which did not excite me, and rain threatened to fall at any moment.  However, as soon as I reached the end of the road I was greeted by the sight of an adult grizzly bear, a big, dangerous, omnivorous mammal whose range south of Canada is limited to Wyoming, Montana, and Idaho:

In the lower 48 states only about 1,500 grizzlies are left (less than 100 in northern and eastern Idaho), and Yellowstone, Tetons and Glacier pretty much corner the market on grizzly sightings.  This sighting boosted my mood, despite the rain.  But it rained all afternoon, with only a five-minute break to allow me to get this sunset shot:

It rained all night, with strong wind, so I had to use earplugs to sleep. It rained all morning, too, and I had to stand under the eaves of the restroom to get these early morning shots:

The gods finally allowed another five-minute break so I could run out to a better vantage point to get this final shot before retiring to my camper to read while it rained:

Fed up with the rain I packed up at noon and drove to East Glacier Lodge  The parking lot was sunny, so I tilted my roof to maximize solar energy for the panel, and headed to the lodge for a bowl of corn bisque and to check my email.  An hour later, in hopes of more sun, I headed for a campground I’d never tried before: Cut Bank, which had always been closed by the time I arrived at the park in previous years.  I was the only camper, but all the campsites were under trees, and it was still cloudy, and with my solar panel goin’ beggin’ I drove 20 miles to St. Mary campground, which I knew would likely be sunny.

Sure enough, St. Mary was sunny, for $5 per night.  My solar panel was happy.  Here’s the Mad Max variety of campers I saw there: 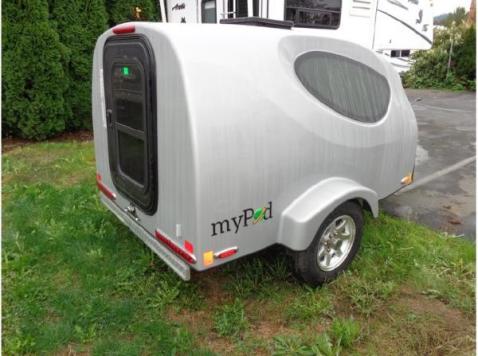 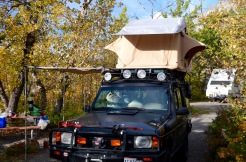 Early the next morning I headed back down the road towards Cut Bank, about 10-15 minutes drive to a lookout on a gravel road that I had found the day before. It afforded a great view of the park’s mountains and St. Mary Lake, and I got there before sunrise and waited for the magic light, but it never came because of the cloud cover.  It was time to try my luck at Many Glacier, about 30 minutes drive north.  A few shots along the way: 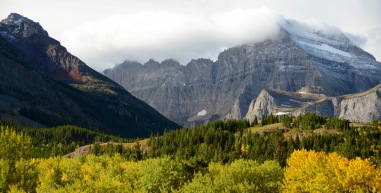 By noon it was sunny enough to inspire me to hike the 7.6 round-trip miles of the Grinnell Glacier trail (difficulty rating: “strenuous”).  I’d seen the trailhead every time I visited the Many Glacier campground, but I never took the time to hike it, as I was always en route to another photo op.  This time, with the sun managing to peek through the ubiquitous cloud cover, I decided to take the plunge and see what I’d been missing.

Apparently, everyone else in the park had the same idea.  The trailhead parking lot was jammed full, and I had to park at the boat launch about a quarter-mile away.  I started the hike at noon, knowing the high sun would not be the best for photography, but the views were too spectacular not to shoot:

Aside from a young moose munching lunch just off the trail…

… other young residents of the planet were enjoying themselves: 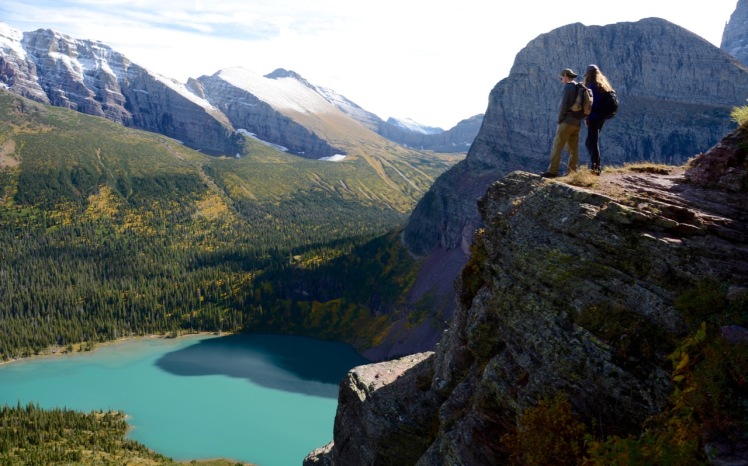 At the far end of the trail, Grinnell Glacier itself was not that photogenic, but I did finally reach my goal of shooting bighorn sheep in the wild, at about 6,500 feet: 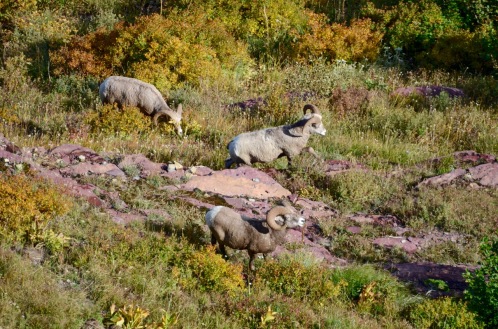 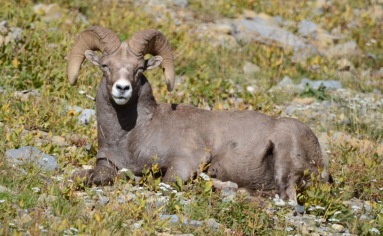 I got back to the parking lot at about 6 PM and drove back to St. Mary campground for the night, thinking I would hike the Hidden Lake Trail at Logan Pass the next day for possible shots of mountain goats at about 6,700 feet.  But the next morning it was raining again.  I drove to the Logan Pass parking lot before sunrise, hoping it would soon clear, but after waiting for a couple of hours it remained as foggy as ever.  In hopes that Apgar campground at the far western side of the park would have sun, I finally took off, resigned to be content with my old mountain goat shot on Hidden Lake Trail from 13 years earlier:

As I drove down the west side of Going-to-the-Sun Road I took this one, last shot:

It turns out that Apgar, too, was under clouds, and the weather report indicated rain for the rest of the week.  I decided to drive back to Boise, and resolved that I wouldn’t visit Glacier National Park in September again.  (It rained the whole two days driving back to Boise).  I’d never visited Glacier in September before, and I’d never seen it so rainy.  It’s a long way to drive (two days) for one day of clear weather in one week of visiting.

My next stops, in October, will be national parks in Utah, possibly Arches, Zion and Bryce, and then the Grand Canyon in Arizona.  Now, if you ask me which national park is my favorite crown jewel, I guess I’d have to say… It depends on my mood, which depends on…