Sept. 21, 2015:  Twelve days after our previous visit (me, Frank and Clair) I served again as a tour host to the Sawtooth Mountains, this time with John, who drove to Boise from Durango, CO, on his vacation.  We headed for Wild Horse Campground, since I found it on a good map this time.  We drove up Trail Creek Road beyond Sun Valley:

An hour later we found the road to Wild Horse Campground at the southeastern edge of the Boulder-White Clouds Wilderness:

Within a few minutes we found the campground, which was occupied by hunters, so we followed the road as far as we could toward the sawtooth-looking peak in the distance.  We got about 100 feet beyond the campground before we saw a moose in the road:

It was big and had spikes on his antlers, so we stopped about 100 feet away.  Bullwinkle was nervous, obviously didn’t like us there, and he ran off into the bushes.

The road got rough, suitable only for high-clearance 4WD, but we found a nice campsite at the end of it, with nobody else around, with a half-moon rising. 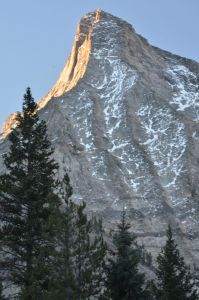 Across the stream, about 200 feet away, we saw another big moose and a smaller one, munching the foliage, but it was too dark for photos.  They stayed put, apparently comfortable with the stream serving as a barrier between us.

The next morning we headed back down the road and encountered another Toyota pickup coming up the road.  To my surprise the driver stopped and got out, and then I realized who it was:  Greg Jahn, my photographer friend from Boise who first told me of this area.  He was on his way to backpack into the mountains:

It seems chance encounters between us are par for the course (see last paragraph of “About”)  We chatted awhile and he mentioned that he’s been coming up here since 1982 and usually sees moose.

John and I headed back to Sun Valley and then north over the pass at Galena Summit to look for tonight’s campsite.  We drove up another rough road to Fourth of July Trailhead:

But we didn’t find any suitable campsite, and it was crowded.  So we headed back down and then more north to Fisher Creek Trail, which was the roughest road yet, all the way to the end.  It’s a popular mountain bike trail, but not a camping area: 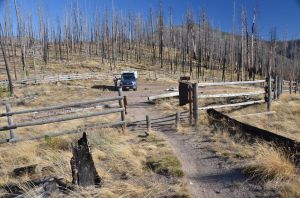 So we headed back down and further north to Redfish Lake, where I had camped 12 days earlier with Frank and Clair and had confirmed the campground would be open for this trip with John.  They were wrong, it was closed.  So we headed to Stanley Lake, arriving just in time for sunset on the peaks:

The campground was closed here, too, only for maintenance until the weekend.  So, we headed up Elk Mountain Road (Rte 649), the only road that was still open, and found a campsite.  The next morning we drove all the way up the road and found an even better campsite with a view, for a future trip.

On the way back to Boise we explored another road that Greg Jahn had mentioned:  Summit Flat Road, which could not have been more inaptly named.  It was the steepest road yet, and I can’t believe we actually squeezed by another truck that was coming down the road.  It took us about 45 minutes to get to Pilot Peak, which has a communications installation that appears to be entirely powered by solar panels.  The view was great from the highest lookout tower in the Boise area mountains: